Even in the age of digital photography, archaeology still relies heavily on old-school hand-drawn illustrations for documenting artifacts, particularly for publication. It can be difficult, or even impossible to get a single photograph that shows all of the artifact’s key details. In my area of interest, knapped stone tools, low relief in small-scale surface topography, high relief in large scale topography, specular (reflective) materials, variations in material color and contrast across the surface, all conspire to make these artifacts difficult to photograph. A skilled illustrator is capable of creating a drawing that reveals far more detail than even a good standard photograph (Figure 1). But creating such a drawing requires experience, time, and money, often making it impractical. 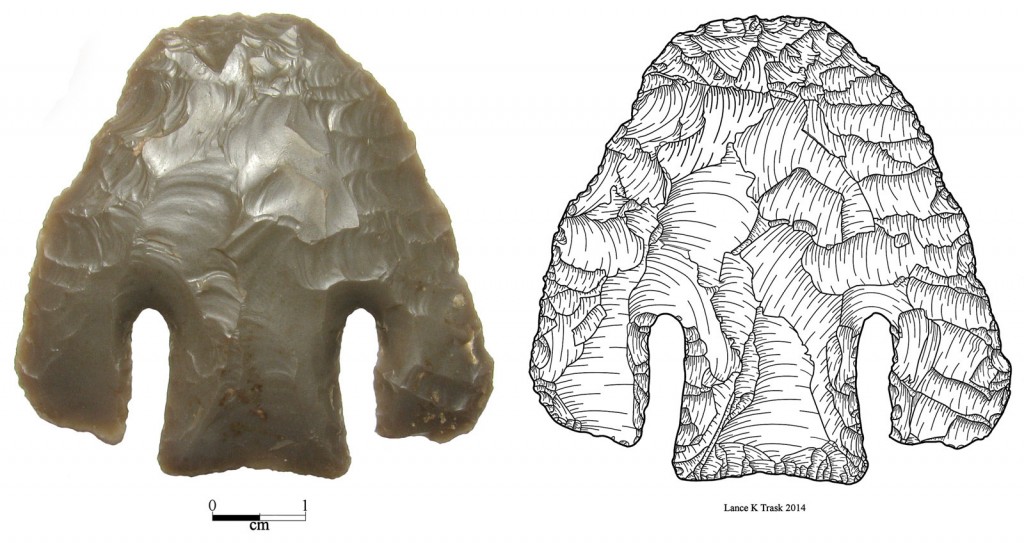 Reflectance Transformation Imaging (RTI) is a great way to document and image knapped stone tools. The ability to interactively modify the lighting angle, as well as mathematically manipulate the perceived interaction of light and surface, allows the viewer to see details difficult to photograph. It’s almost the equivalent of having the object in your hands, and turning it at various angles to the light to reveal details of its structure and manufacture. However, one drawback is that you can’t embed an RTI view in a paper or publication unless it’s in electronic format. Also, unlike a drawing that can show all the critical details at once, you may have move the virtual lighting angle to many different directions to reveal all details.

Using data from the custom RTI systems I described in a previous post, I’ve been working on ways to create static images of knapped stone tools with detail comparable to that in a line drawing. Figure 2 shows a series of images of a modern knapped projectile point fashioned from specular black obsidian, a particularly difficult material to photograph because of its shininess and lack of contrast. 2-A is an original digital photograph, with the lighting coming from the standard upper left direction; while a fair amount of detail is visible, shiny highlights obscure some details, and the overall convex shape of the point interferes with lighting on the right side of the point. 2-B shows an RTI view with lighting from upper left; while glossy highlights have been eliminated, and more detail is visible on the right, other details are somewhat more subdued in this static view.

Figure 2-C uses the RTI specular viewing mode, which imparts an artificially-shiny character to the surface. This is actually a superior result for this mode on knapped stone tools – most of the time, it doesn’t look nearly this good (as you’ll see shortly). But this image suffers from lack of detail in some areas, probably because of the artifact’s overall convex surface shape. Figure 2-D uses the RTI Static Multilight mode, where the RTI data is analyzed to determine the optimal blend of multiple light angles to reveal details. Once again, this is a better result than I usually get for knapped stone tools, but some details are still hard to see because of lack of contrast in many areas.

Overall, I have found that the recently-added RTI Normals viewing mode leads to the best results. This mode color codes the surface based on the perpendicular direction at every point in the image. Figure 2-E was generated using the Normals mode and a 2nd-order HSH RTI file (standard PTM polynomial files produce markedly poorer results). Even in the raw colored state, the amount of detail visible across the entire surface is vastly superior to the other views. Using standard image enhancement techniques, one can further process this image to generate an extremely-detailed view of the artifact’s surface details (Figure 2-F).

While this modern artifact was made of a difficult material, the freshness of manufacture, lack of wear, and non-exposure to the elements make the surface features quite sharp and easy to see. What about an actual prehistoric point with a real history? Figure 3 shows a series of similar photographs for the Molina Spring Clovis point, collected about 10 years ago in the Apache-Sitgreaves National Forest. Clovis points are approximately 13,500 years old; this one in particular has seen a lot of wear on the flake scars, making them difficult to make out. What’s more, the point’s material (chert) is slightly glossy and very light in color, minimizing contrast in surface details. Figures 3-A through 3-F show the same image processing sequence as Figures 2-A through 2-F; note in particular that the Specular and Static Multilight modes (3-C and 3-D) do not produce especially useful images for this point. The raw Normals image (3-E) brings up details difficult to impossible to spot in the previous images, and enhancing the Normals image (3-F) makes those details even easier to see. For Figure 3-G, a Matlab script was used generate a modified view based on slope; this brings out certain details not immediately visible in the original normals image. In my opinion, mages like 3-F and 3-G are superior to standard digital photographs of knapped stone tools, and could well be used instead of line drawings for publication purposes. Even in cases where line drawings are preferred, these images could provide a useful background basis for tracing artifact details, instead of drawing them freehand.

Beyond static images, the normals data can be used to generate a full 3D representation of the artifact’s surface. Some examples of this are visible at my website, along with downloadable 3D files and RTI data files for several projectile points. The 3D surfaces aren’t yet fully accurate, as they can be affected by inaccuracies in the normals calculation, and error accumulations in the surface fitting. However, these results are already significantly improved from my initial efforts, and I will be working on improving them further. Even in the current form, I believe that it should be possible to extract usable information than can be used to quantitatively characterize knapped stone tools.