Note: I’ve just started a project page on Hackaday, which will ultimately have full directions on how to build your own inexpensive RTI system

(A shorter version of this page appeared on the Cultural Heritage Imaging blog).

I first learned about Reflectance Transformation Imaging (RTI) back in 2009, when I stumbled across the HP Labs page describing its use on the Antikythera Mechanism. One of my first thoughts was that this could be a useful tool for imaging and analyzing lithic archaeological artifacts, flaked stone tools in particular. It wasn’t an original thought even back then, and over the next four years I saw the occasional RTI lithic image pop up on the web, demonstrating how useful RTI could be for this application.

Early in 2013, I started experimenting with RTI on some modern replica projectile points using the Highlight-RTI method. Even though I got usable results with some of these experiments, I found the Highlight-RTI process too difficult and time-consuming to use on a regular basis. I know some people can do Highlight-RTI one-handed, and I am not one of those. Because the small artifact size limited my working space, I kept on bumping either the camera or the tripod, throwing the alignment off. In addition, processing the results through RTIBuilder, while not difficult, was a bit more time-consuming than I had hoped for. Dome-RTI got around all these issues, but there were no commercial systems available, no DIY-plans available, and the few custom-built systems I saw online suggested a cost in the vicinity of at least $10-30 thousand dollars, well out of my price range. So I decided to design and build my own Dome-RTI system.

Figure 1 shows my 18-inch diameter Dome Mark 1. Perhaps more accurately, Dome Mark 1.6, as virtually every component was rebuilt to improve it, often several times. The first version used inexpensive 64 0.5-watt straw-hat LEDs with external non-soldered wiring connections; it worked, but the exposure times were long (on the order of one second), and the system had to handled carefully to prevent the wires from breaking. The second version used 1-watt straw-hat LEDs and a modified non-soldered wiring system. While exposure times were better, they were still longer than desired. The wiring system was now a bit more rugged, enough to make it transportable, but still had to be handled with some care to prevent wires from breaking or pulling loose. 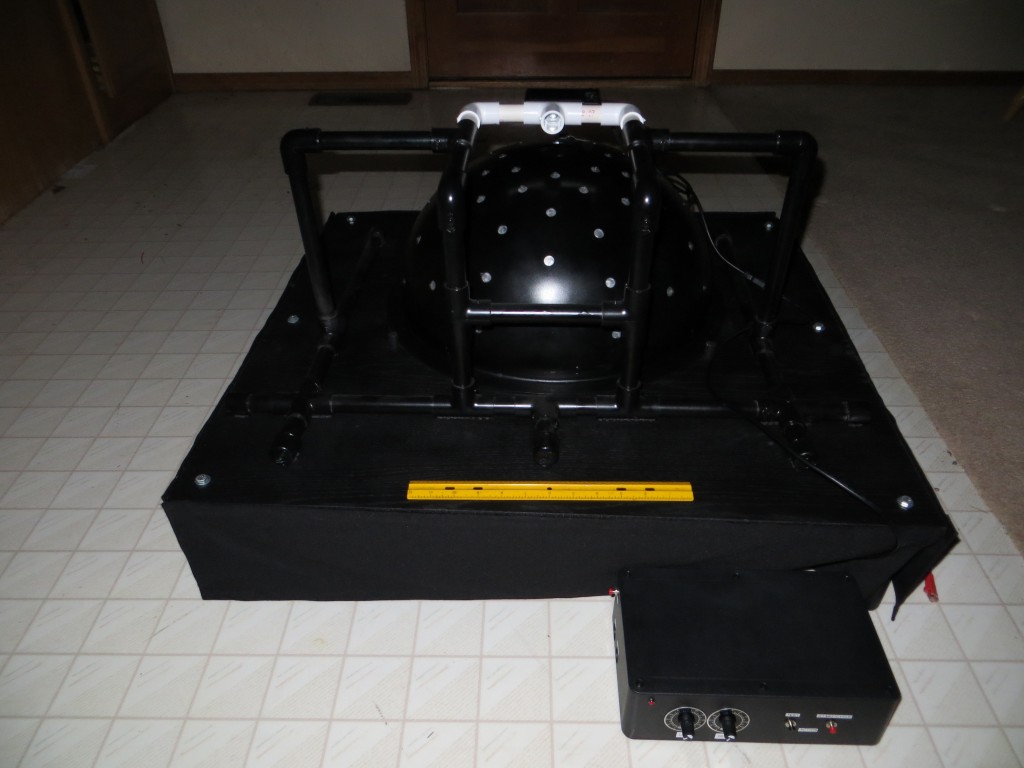 The next step upward in LED power was to 3-watt star LEDs, but this required a partial re-design of the wiring system, and a full re-design of the controller. The maximum current from the original controller design was 350 milliamps, and 3-watt LEDs need 1 amp of current for full intensity. So, I designed and built a custom electronic driver circuit capable of supplying the required current. I also rebuilt the original camera stand (made of PVC pipe) to be more stable. I constructed an elevated dome stand that allowed samples to be placed on a lab jack, then slid into position under the dome (similar in general concept to the sample system used by domes built by the University of Southampton). Finally, the wiring system was revamped one more time to move most of the wiring inside the dome.

While this revised first dome now works quite well for performing RTI, and is still used for larger artifacts, it is grossly oversized for most of the artifacts I’m interested in documenting. Most flaked stone lithic artifacts in the American Southwest are less than 3 inches in length, and an 18-inch dome is easily capable of imaging artifacts of at least 4.5” in maximum dimension (and I’ve gotten useful results on artifacts up to 6” in length). What’s more, these artifacts are housed in scattered locations (museums, government facilities, universities, etc.), and the large size of the dome and stand make transportation and setup of this big system cumbersome.

Using all that I learned from two years of development on the first system, I’ve now built my Mark 2 RTI dome (Figure 2).

This new design incorporates most of the features from the first dome, while adding some improvements and unique capabilities:

I wanted this Mark 2 RTI system to be more portable than my original system, but even I was surprised by how portable it actually is.Figure 3 looks like a typical camping backpack, which is exactly what it is. But inside the backpack is the entire RTI system shown in Figure 2, including the battery pack, with room to spare. The total weight including the backpack is less than 5 kg, making this a truly portable, field-ready system (Figure 4). When recording archaeological sites out in the field, it is often not possible to collect lithic artifacts to bring back to the lab for proper documentation. You either have to photograph them in the field (usually with less-than-satisfactory resolution of the details), or hand-draw the flake scars (a slow and tedious process, and often highly inaccurate). This portable RTI system makes it possible to thoroughly document lithic artifacts on-site. For easy transport to normal labs and storage facilities,  its small size allows to fit into a Pelican case.

This system has a few more tricks up its sleeve. Full analysis of a lithic artifact may require microscopic analysis of edgewear to determine how it was used. A simple reconfiguration of the system (Figure 5) allows it to do microscopic RTI imaging of lithic artifacts, using either the USB microscope (as pictured), or a DSLR equipped with a macro lens that has a working distance of 6” or more (roughly 90-100mm focal length). A micrometer stage allows for accurate positioning of the artifact under the microscope. I’ve only done a few test cases with it so far, but the results were described by one lithics expert as some of the best lithic micrographs he had ever seen. 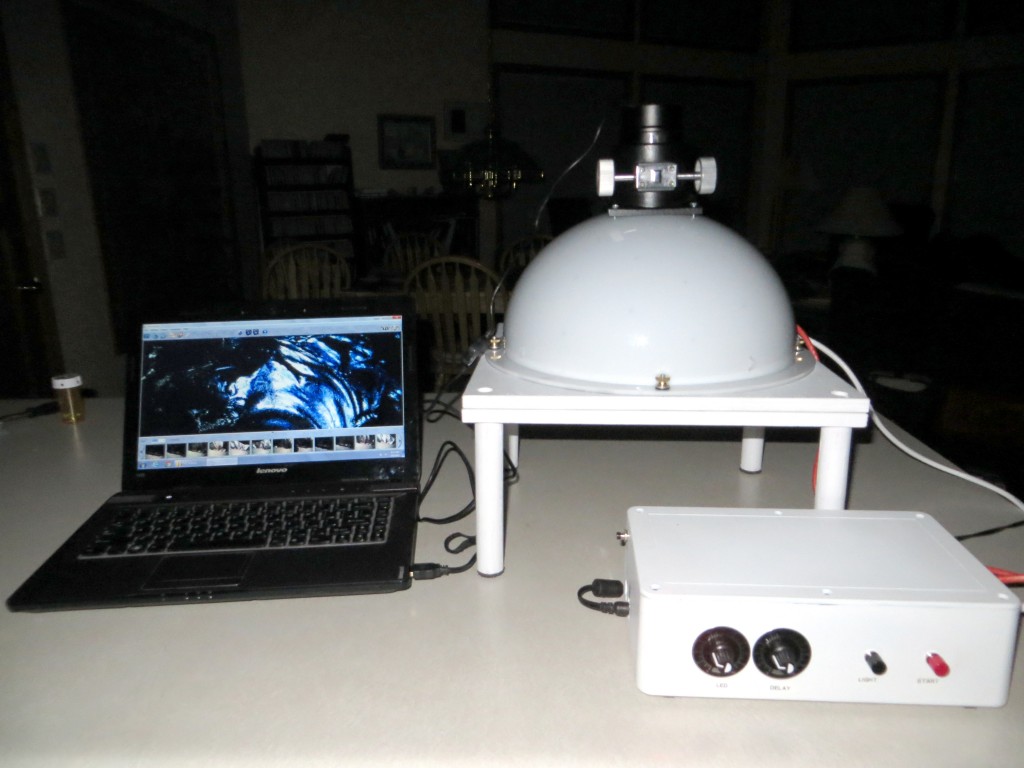 One final trick: you can flip the dome around, and mount it vertically to image larger objects. While I plan to use it to image Southwestern pottery and other objects, Figure 6 shows the system in vertical mode being used to image an oil painting by the noted equestrian artist Boguslaw Lustyk. The normals will be off a bit because of the increased spacing between dome and painting, but you can still get useful results, like the specular mode image shown in Figure 7.

Total parts cost of this Mark 2 dome, including the Canon camera, was well under $800. Scaling the dome up to a higher size would increase the cost only by the extra cost of the dome plus additional LEDs if desired (e.g. 64 instead of 48. For example, a one-meter dome with 64 LEDs would add approximately $400 to the total cost. In the near future, I hope to post information/instructions online that would allow anyone to build a system of their own. If I can build a system without instructions, I’m sure many others could easily build such a system with instructions.

Feel free to contact me at leszek.pawlowicz@nau.edu with questions and comments. You can also drop me a line if you want me to do RTI imaging of your own artifacts. And if you need a dome right away, let me know – I don’t really want to be in the business of building these on a regular basis, which is why I hope to publish full instructions, but might be able to squeeze out a few more if absolutely necessary.

One Response to Building The RTI System